The 2017-2018 Talon team is responsible for all aspects of testing besides the design of the engine itself. To safely test engine designs, we are going to build an engine testing facility. It will consist of a test stand and propellant feed system mounted on a trailer, a control center at a safe distance from the trailer, and all necessary sensors and data acquisition. We will also establish safety measures such as a safe radius during testing, noise level control, and a fire suppression system. Finally, we are coordinating with the school for safety approvals and finding a location to run the tests. 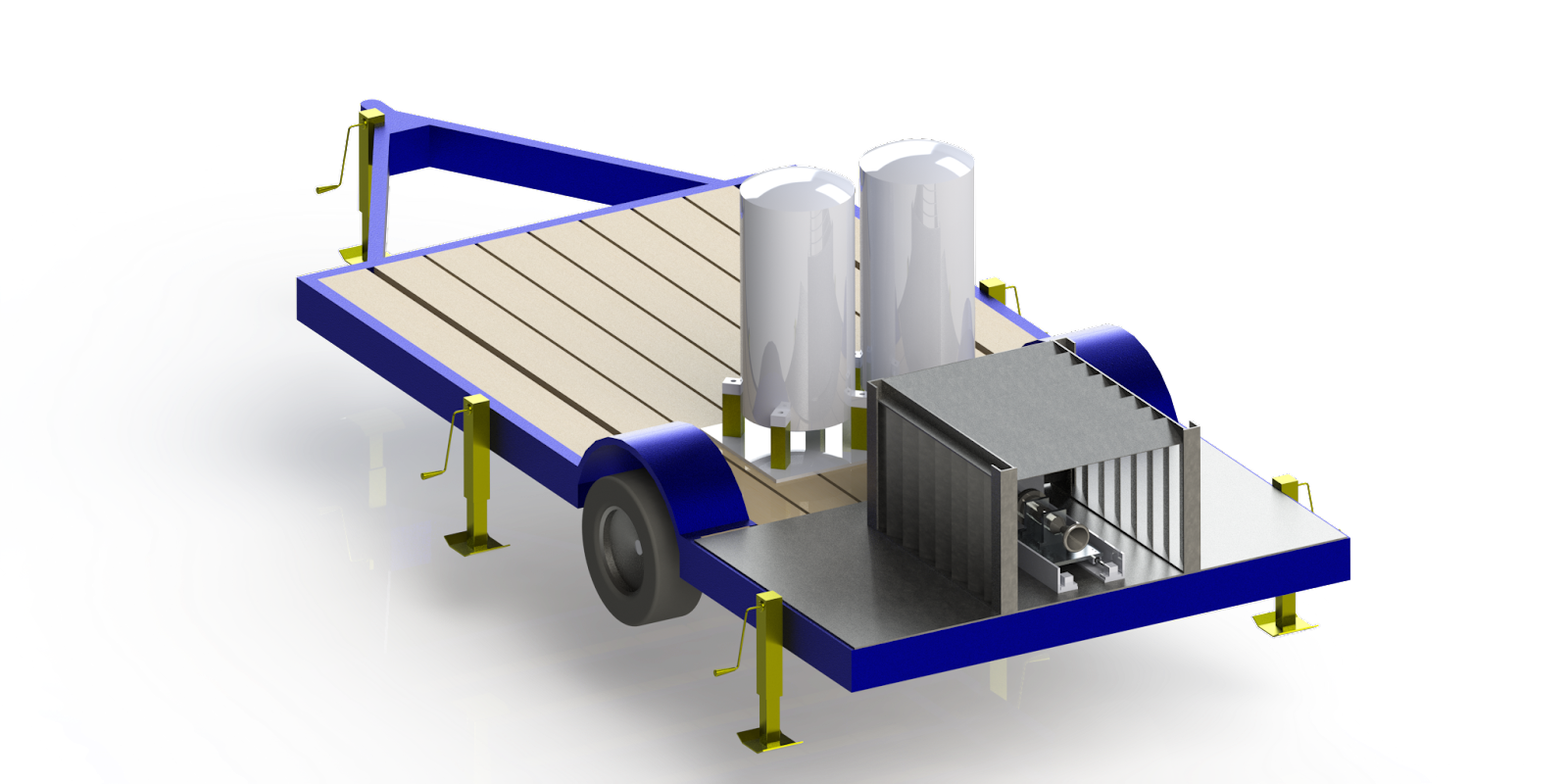 We will use a horizontal test stand mounted on a trailer (above) for static engine testing. Mounted parallel to the ground, the engine will press against a load cell to measure output thrust while the trailer is supported by feet staked to the ground. The trailer will also hold a burn box acting as a blast shield around the test stand with the fuel and oxidizer tanks mounted behind. 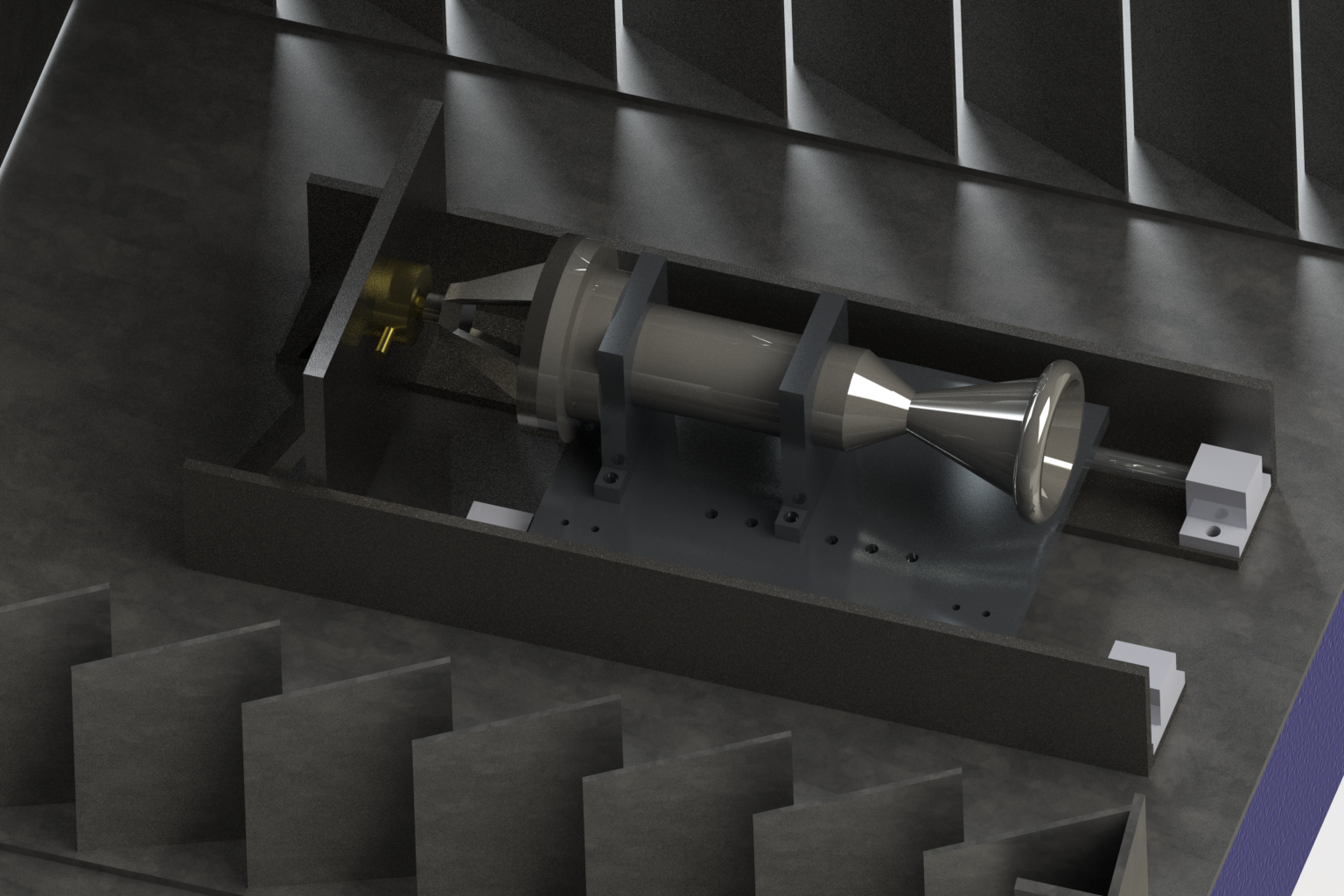 The test stand will collect force, temperature, and pressure data and feed it directly to our remote computer, where it will be logged. The horizontal mounting orientation is solid and low to the ground, which puts as little stress on the structure as possible. Vertical mounting would be slightly preferable to reduce the risk of unburned fuel pooling in the engine, but it requires a much larger structure and increases the potential for damage to the stand from the exhaust plume.

The stand will primarily be used on the trailer inside the burn box, but it can be removed for testing with other setups. The mounting system will also be capable of accommodating a range of engine sizes since we expect to iterate through several engine versions, starting with a cold-flow test unit.

The burn box will be designed to deflect and contain shrapnel and debris in the event of an explosion while allowing the pressure wave to dissipate. It will also be designed to dampen the noise level coming from the rocket. 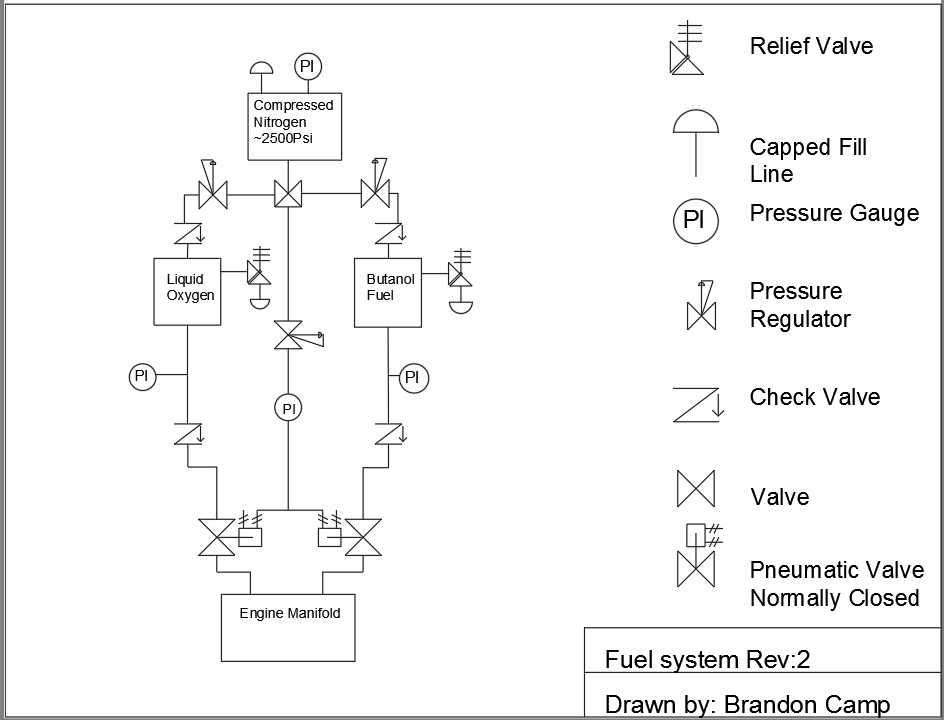 The propellant feed system will maintain appropriate pressure at the injector, keep the fuel and oxidizer separate until they mix in the combustion chamber, hold the propellants in liquid phase until combustion, purge remaining propellants after each test, and prevent propellant supplies from igniting in the event of an engine failure.

There are many approaches to pressurized feed systems, but the most common in small engines is a stored-gas system. The stored-gas system shown above uses an inert gas, nitrogen, to fill the ullage – the empty space in the tanks – maintaining the correct pressure throughout the system.This nitrogen is also able to purge the propellant lines through the central purge line.

In a flight rocket, we would want to precisely size the valves and piping, but for this test system we will oversize the plumbing to save money and accommodate a wider range of potential designs.

A large water tank will be mounted to the testing trailer. Before each test, this tank will be used to spray the ground around the trailer. During hot fires, water will spray below the rocket’s exhaust, wetting and cooling the ground and dampening noise. If a test goes wrong, water will rapidly spray into the burn box, dousing any flames to protect the propellant tanks. 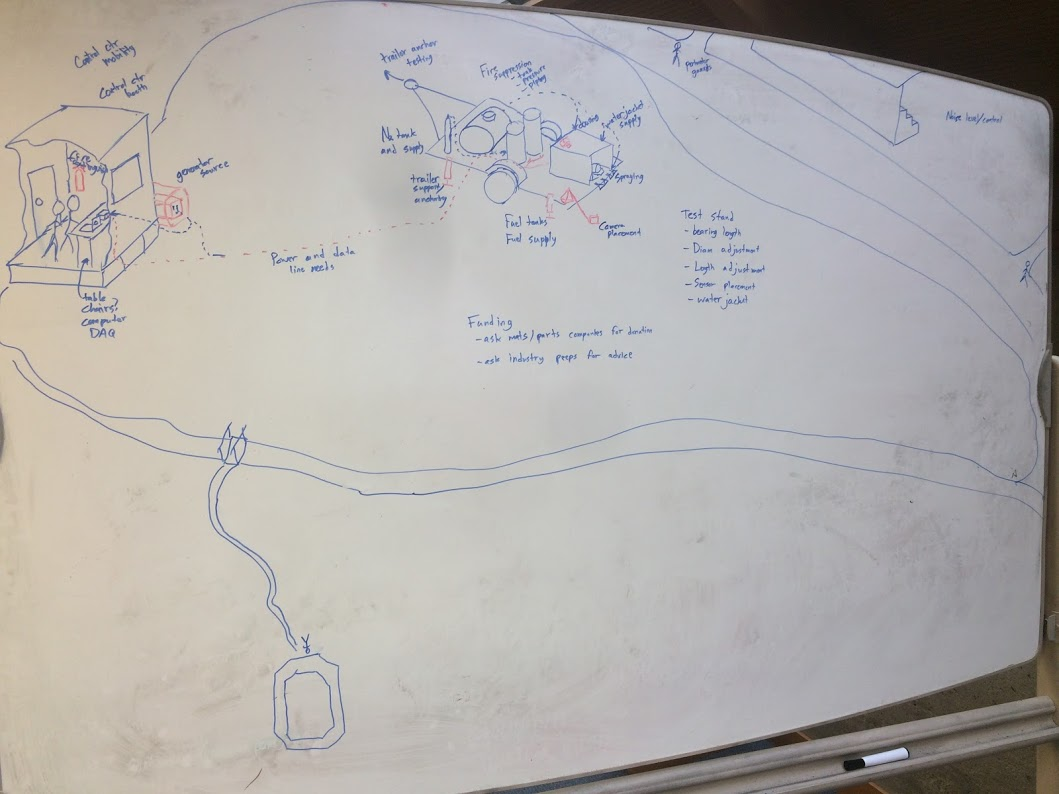 All hot-fire testing will be operated remotely from a control center. The control center will be a small shelter about 75 feet from the test trailer designed to protect personnel from noise and possible shrapnel in the event of an explosion. The center will be equipped with a generator, data acquisition units, a data collection laptop, and fire extinguishers. All tests will be operated remotely and viewed with a series of cameras, keeping all test personnel a minimum of 100 feet away, or within the hardened control center about 60 ft away.

Our fuel, currently n-butyl alcohol, will be stored on campus in an approved location. Oxidizer will either be delivered as-needed on test days or stored in a dedicated liquid-oxygen storage shed with proper venting and clearances. The liquid nitrogen used to pressurize the propellants during testing will be stored in a location with appropriate venting, as is standard procedure.

As we develop the engine, we will incrementally test the design, building up to full-duration burns to prove the engine for flight.

Cold Flow Test: Using pressurized water and nitrogen, we will see if the engine can withstand the pressure requirements for combustion. We will also examine flow patterns in the system.

Ignition Test: The maximum burn time for this test will be 2 seconds. The purpose is to see if we can safely ignite the engine. During this process, we will discover if our ignition system creates undesired flow patterns, unstable heat or any other hazards, and we will see if the pressure difference between the chamber and lines will stabilize.

Incremental Burn Tests: This test will still use water cooling to minimize the impact of the cooling system. We will incrementally increase the burn time up to a full burn of 20 seconds. We will measure the water temperature across the cooling jacket to quantify the heat transfer during combustion so we can refine the cooling system design. Additionally, we will record the output thrust and internal pressures to measure performance.

Cooling Tests: Having proven the engine can burn safely, we will test the final, regeneratively cooled design. Like before, we will increase the burn time incrementally, replacing any damaged components before each test. We will compare the performance of this engine to that of the water-cooled engine to quantify the impact of the regenerative cooling process.

Future: We can continue to use the test stand for testing new engine designs, and we may be able to open it up for other schools to use for their rocketry projects.